Two major, global drivers of environmental impacts today are land-use change and climate change.  Typically researchers focus on one of these phenomena at a time - my own work to date has been focused on land-use impacts on birds - which is understandable given the complexity of each. However, since we expect both to occur concurrently, it is critically important to develop approaches to integrate both land-use and climate change impacts, whether in studies of current consequences or in predicting future impacts on biodiversity.

As a postdoc at the University of Washington, I worked with spatially explicit predictions of future land cover for the conterminous U.S. that are based on private landowner decisions.  These predictions are developed using econometric modeling (by S. Polasky, A. Plantinga. D. Lewis and E. Nelson) and translated into a coarse-classification land cover grid (in V. Radeloff's SILVIS lab).  Different landscapes are simulated under different, broad economic policy scenarios (e.g., tax incentives for carbon sequestration, or constraining urban growth).  At the UW, we created a habitat map from the predicted landscapes based on NatureServe's ecological systems classification, and are currently modeling the responses of 230 vertebrates - about which we know habitat associations, area requirements, and movement abilities - to those future landscapes. This work was published in PNAS.

How Migratory Birds Use Urban Habitats in South Florida 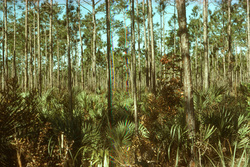 In my  faculty position as an Urban Ecologist at FIU I began to asses the role small habitat patches in urban areas play in providing migratory habitat for terrestrial birds. An article from FIU News came out on various research and teaching projects, with an embedded video on the bird-window collision study we joined in 2015. 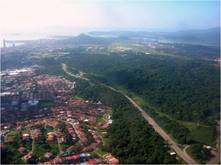 Habitat loss and fragmentation is a major concern in many tropical countries. Although large forested reserves will always be important for many species, I wanted to understand how less forest-dependent birds use (or don't use) non-forested habitat.  While at the Smithsonian Tropical Research Institute in Bill Laurance's lab, I studied habitat use and behavior of three species (Dusky Antbird, Red-throated Ant-tanager, and Buff-throated Woodcreeper), and also surveyed very small forest remnants for all songbirds.  The three species responded somewhat differently to non-forested habitat: within their territories dusky antbirds used forest gaps (small clearings within forest habitat) relatively more, while the other two species appeared to avoid roads and buildings.  Meanwhile, many species ARE able to use very small (1-25 ha) forest patches, but the number of species a remnant supports declines with decreasing area (of the patch) and increasing isolation (from large contiguous forest) as predicted by the theory of island biogeography. 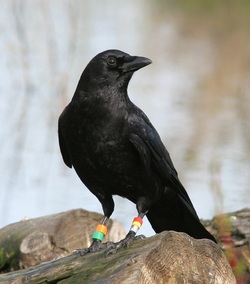 I began studying crows in graduate school at the UW's School of Forest Resources with John Marzluff.  Crows are an important component of many cities' native fauna, and most people have some opinion or relationship towards them (love OR hate).  My early research asked the question, "why are there so many crows in Seattle?"

By monitoring nests across a gradient of urbanization (from the urban core of downtown Seattle to the suburbs, exurbs, and wildlands towards the Cascades) we learned that urban reproduction was not sufficient to explain population growth in Seattle.  Crows in suburbs reproduce at the highest rate, with two young successfully fledging from the nest (on average).  By radio-tracking juvenile crows, we concluded that the movement of young crows from the suburbs to the city contributes substantially to the urban population.